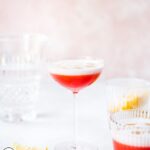 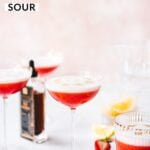 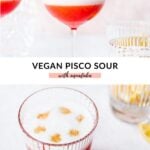 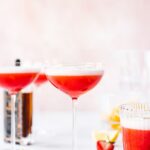 A few years ago, we took an incredible 3-week family vacation to Peru and Chile. It was the most magical trip. Peru and Chile are both absolutely breathtaking and we made so many fun memories as a family.

Of course, many of those memories were made either while eating (so. much.) or drinking, usually a pisco sour. (Photo evidence below – we're a crazy bunch ;)).

We even had a chance to visit a pisco distillery in Chile. (That was after visiting a few wineries, too.) You can bet we did a whole lot of taste-testing.

Since then, we've been enjoying pisco at home and we finally came up with a simple vegan alternative for a classic pisco sour. We also added some strawberry to the mix, but it's an optional addition.

What is a Pisco Sour?

Pisco sour is a tangy, sweet cocktail made with foamy egg whites. It's a signature cocktail in both Peru and Chile (they both claim a right to its origin).

Pisco is made by distilling fermented grape juice into a spirit. A traditional pisco sour also contains lemon or lime juice, simple syrup, raw egg white and angostura bitters. The egg whites are shaken with the rest of the cocktail, making for a light, frothy drink.

Aquafaba is the liquid from a can of chickpeas. You've probably never thought to use it, but it turns out that aquafaba is an incredibly versatile ingredient!

It's used in a number of vegan recipes as an egg white replacement. When whipped, aquafaba turns into a fluffy, light mixture (just like egg whites!) so it's fantastic as a substitute. Plus, it doesn't really taste like anything, so you can even use it in sweet recipes.

Whipped aquafaba is a perfect 1:1 replacement for egg whites in this recipe.

How to make a vegan pisco sour

To make a vegan pisco sour, you'll first need to whip up your aquafaba into a light, frothy mixture. To do so, add the aquafaba to a mixing bowl and beat with an electric mixture. It takes about 5 minutes to form a foamy, stiff mixture.

While that's whipping up, make a quick strawberry purée by blending together ½ cup of fresh stawberries and ¼ cup of water. You can also use defrosted frozen strawberries. For remove the seeds, you can strain through a fine mesh sieve, but it's not necessary.

Pour into a chilled glass, then top with more aquafaba and a few dashes of angostura bitters. Cheers!

More of our favorite cocktail recipes

If you make this vegan strawberry pisco sour, we’d love for you to leave a comment and rating below! We also love to see your creations on Instagram – tag us at @crowded_kitchen so we can see what you’ve been cooking.