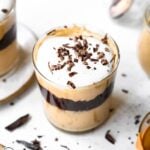 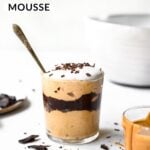 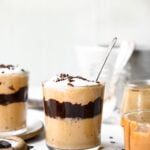 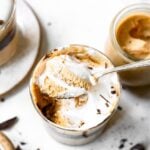 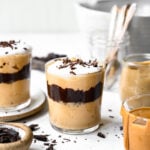 This vegan peanut butter mousse is light, fluffy, rich, salty, sweet and easy to make with just 6 ingredients. Plus, there's an optional (but encouraged) chocolate ganache layer that only takes a few minutes to whip up. Oh, and it's ready in about 15 minutes. Have we convinced you?

It's not officially summer here in Michigan yet, but it has been 85˚+ for the last few days, so there's pretty much zero chance I'm turning on my oven to make dessert any time soon.

I love fresh-out-of-the-oven cookies just as much as the next person, but when it's this hot, I'll take a bowl of cookie dough ice cream instead. Or, even easier, I'll happily take a jar of this 6-ingredient peanut butter mousse (no ice cream maker required!).

If you're a PB purist/trying to avoid washing more than one bowl, don't bother with the chocolate ganache layer. That being said, if you're like me and could eat chocolate peanut butter cups for breakfast, lunch and dinner, make the chocolate. And thank me later.

What makes this mousse so light and fluffy, you ask?

No, it's not avocados. And it's also not whipped aquafaba, which is what we used in this chocolate mousse.

We wanted to make this recipe super simple, without any unusual ingredients, and still as fluffy as possible. The answer to our dilemma: store-bought vegan whipped cream! (So Delicious coconut whipped cream is our favorite and is available almost everywhere.)

It's the perfect shortcut to an easy, crowd-pleasing dessert. Yes, you could technically make vegan whipped cream from scratch instead, but we've found that the texture is never quite as fluffy as store-bought alternatives.

If you don't care as much about the texture and want a healthier version, use whipped full fat coconut milk instead.

Along with vegan whipped cream, you'll need a bit of vegan cream cheese, which lends a tangy flavor and creamy, thicker texture to the mousse. There are plenty of store-bought options available - we haven't tried one yet that we don't like.

Next up: peanut butter. We opt for unsweetened, smooth peanut butter. If you use sweetened, feel free to leave out the maple syrup. I prefer maple as the sweetener in this mousse but you can also use agave. A pinch of salt and some vanilla extract round out the flavor.

There are a few methods to achieve a mousse-like consistency with vegan ingredients. Our favorite is this whipped aquafaba method, but it takes quite a bit of time. Plus, we found it doesn't set up quite as well without the chocolate.

To make this mousse, we use a stand mixer with a whisk attachment. The key is to let the mixture whip up for more than 5 minutes, at which point it starts to lighten in both color and density.

See below for what the mousse should look like. The texture is similar to a thick whipped cream. It's so good!

As we mentioned at the beginning of this post, you can keep your peanut butter mousse plain jane, or you can add in an easy chocolate ganache layer.

To make a super easy (and pretty nutritious) chocolate sauce/ganache, whisk together equal parts melted coconut oil, room temperature maple syrup and cocoa powder. Add in a pinch of salt of vanilla for flavor and whisk until smooth.

So easy and versatile! It's fantastic as a topping for ice cream, as a filling for cake or as a simple dipping sauce for fruit.

If that's not enough, you can also top this mousse with more whipped cream, chocolate shavings and chopped peanuts. Might as well go all out, right?

If you make this vegan chocolate peanut butter mousse, we’d love for you to leave a comment and rating below! We also love to see your creations on Instagram – tag us at @crowded_kitchen so we can see what you’ve been cooking.

This vegan peanut butter mousse is light, fluffy, rich, salty, sweet and easy to make with just 6 ingredients and doesn't take any time to set. Plus, there's an optional (but encouraged) chocolate ganache layer that only takes a few minutes to whip up.

You can make the mousse up to a day ahead of time. We suggest pre-portioning into jars as it's easier to do when the mousse isn't refrigerated.