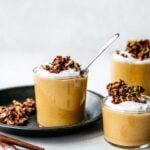 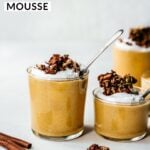 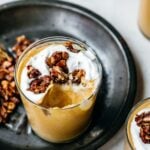 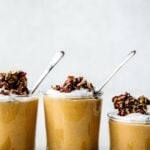 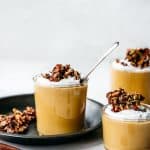 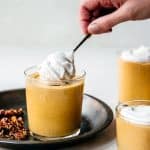 Creamy, dreamy, luscious vegan pumpkin mousse with extra whipped cream and a maple nut brittle. What more could you ask for in a fall dessert?

Since going gluten free and (mostly) vegan, Thanksgiving has been...interesting. Not in a bad way. We've only had a few failures, but until the last year or two, everything has kind of been a test run.

Dessert, especially, have been a challenge (followed by main dishes). Making gluten free/vegan pie crust that's flaky, stays together and tastes good is no walk in the park. (To say the least!) We still haven't quite figured out a recipe we truly love, so we've been skipping the pumpkin pie until we do so.

Luckily, this super creamy vegan pumpkin mousse is an excellent alternative to pie. In fact, it's good enough to rival a classic pie, in my opinion. Plus, it's easy to make and even easier to serve. You can make this mousse up to a few days in advance, which means no last minute panic on Thanksgiving day.

The recipe differs quite a bit from our classic vegan chocolate mousse recipe, which is made with aquafaba. Aquafaba, in case you haven't heard of it, is the liquid from a can of chickpeas.

By some form of magic, it whips up into a fluffy foam that perfectly resembles egg whites. It works wonders in our chocolate mousse, but just didn't hold up with puréed pumpkin.

Instead of aquafaba, this pumpkin mousse is made with a base of full fat coconut milk and store-bought vegan whipped cream.

I know, we're kind of cheating with the whipped cream, but we have yet to find a recipe that replicates the texture and lightness. If you really don't want to use it, you can sub with more full fat coconut milk. Just note that it won't be quite as light and fluffy.

Speaking of store-bought dairy free whipped cream, this stuff is the best. It tastes exactly like Cool Whip and it's available at most grocery stores in the freezer section. Don't forget to let it defrost before making this mousse!

Full-fat canned coconut milk is an essential for this vegan pumpkin mousse. You can find it at any grocery store, typically in the Asian section. Don't use lite coconut milk - you really need the full fat for mousse. You can also opt for coconut cream if it's available.

To make a thick, creamy mousse, it's best to refrigerate the canned coconut milk before adding to this recipe. Pop a can in the fridge for a least a few hours or overnight. We always keep at least 1-2 cans in the fridge at all times since we use it so frequently in recipes!

When you open the can, there will be a thick, solid layer of coconut milk on top. Scoop that into the mixing bowl with a spoon. When you get towards the bottom of the can, you'll hit a layer of liquid.

Don't add that to the mousse. Just scoop out as much cream as possible, and discard the leftover liquid.

You can use an electric hand mixer or a stand mixer to whip the mousse.

The vegan pumpkin mousse is delicious on its own, but it definitely benefits from a bit of texture. This maple nut brittle is super easy to make while the mousse is chilling. It really takes this mousse to the next level! Warning: you might eat it all before the mousse is done 😉

You can use any nuts/seeds you'd like for the brittle. We opted for a variety, including pecans, pepitas, almonds, cashews and hemp seeds. Just make sure they're unsalted and raw.

All you have to do is mix together the nuts with maple syrup and a few spices, give it a good stir and spread into a thin layer. After 35 minutes in the oven, they crisp up into a delicious salty/sweet/crunchy brittle. So good! Honestly I might make this just to snack on.

Skip the pie this year and opt for a few of these easier recipes (including this vegan pumpkin mousse, of course!).

If you give this vegan pumpkin mousse recipe a try, we’d love for you to leave a rating and review below! We also love to see your creations on Instagram – tag us at @crowded_kitchen so we can see what you’ve been cooking.

Creamy, dreamy, luscious vegan pumpkin mousse with extra whipped cream and a maple nut brittle. What more could you ask for in a fall dessert?