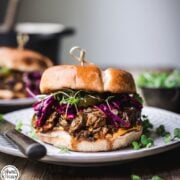 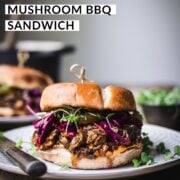 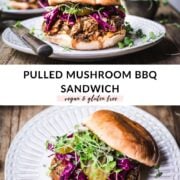 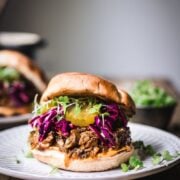 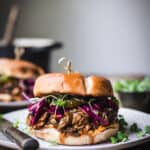 Can you believe this pulled mushroom "pork" sandwich is vegan?! It looks and tastes surprisingly similar to meat, but it's made with just mushrooms. Perfect for your next summer bbq - you might even get some carnivores to give it a try!

We are SO excited to share this recipe. A few months ago, we saw a recipe on Pinterest for pulled mushroom tacos and I couldn't get over how good they looked. The only issue is that the recipe required oyster mushrooms, which aren't widely available and can be pretty expensive.

While pulled oyster mushrooms do have a remarkably similar texture to pulled pork, we figured out after a few trials that a number of other mushrooms work equally well.

We landed on a mix of shiitake, button and portobello mushrooms, plus some caramelized onions for good measure.

The result is a meaty, satisfyingly umami sandwich that pairs perfectly with traditional bbq flavors. Even my grandpa (a staunch carnivore) went back for a second serving! That's the ultimate compliment in our book.

This vegan pulled pork recipe made with mushrooms is far less complicated than it looks. In fact, we actually just thinly slice the shiitake mushrooms and it works perfectly!

The key is just to have some different sizes and textures to mimic real pulled pork.

Portobello mushrooms can be "shredded" into larger chunks to add extra meatiness. Simply use a spoon to remove the dark inner gills (not totally necessary, but it's easier to shred).

Then, slice into quarters and use a fork and your hands to gently shred. The shreds won't be evenly sized - that's totally fine.

The shiitake and button mushrooms can either be thinly sliced with a sharp knife or alternatively shredded in a food processor. It's really up to you and what you find easiest and most convenient.

You'll need quite a few mushrooms to serve more than four people. Mushrooms contain a lot of water, so they tend to shrink down quite a bit when cooked (like spinach!).

Once you get them in a hot pan, they cook down pretty quickly. Then, you'll just need to add your homemade bbq sauce, let it simmer, and you're good to go!

Of course, if you'd prefer to use store-bought bbq sauce, that's perfectly fine, too. And a bit easier, especially if you're serving a crowd.

This vegan pulled pork is the perfect make-ahead recipe. Store in an airtight container in the fridge, and simply reheat on the stove before serving. I love eating it as leftovers the next day! It's even perfect just served over rice.

Whether you're making this sandwich with pulled mushrooms, chicken or pork, it's all about getting a few different textural elements in there.

We always start out with a freshly toasted bun. We spread a bit of vegan butter on each side and pop it on the grill for a few minutes. The toasted bun helps hold everything together and adds a bit of crunch!

I always spread the bottom of the bun with a bit of spicy vegan mayo. A thin layer of mayo on the bottom bun also prevents the bun from getting too soggy, so I highly suggest using it.

When it comes to toppings, I like to keep it simple with a basic marinated purple cabbage "slaw" and some tangy pickles. It's the perfect amount of crunch, tanginess and freshness!

When it comes to marinating cabbage, you can keep it super simple with a bit of lime juice and salt. It's just enough to soften it up and add some flavor without too many complicated steps or ingredients.

More recipes for your summer bbq

Round out your summer BBQ menu with these side dishes, cocktails and desserts to compliment this pulled mushroom sandwich:

If you make this vegan pulled pork recipe, we’d love for you to leave a comment and rating below! We also love to see your creations on Instagram – tag us at @crowded_kitchen so we can see what you’ve been cooking.

Can you believe this pulled mushroom sandwich is vegan?! It looks and tastes surprisingly similar to meat, but it's made with just mushrooms. Perfect for your next summer bbq - you might even get some carnivores to give it a try!