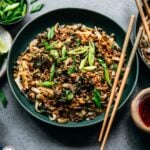 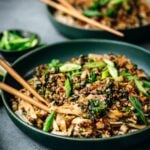 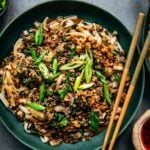 These Vegan Dan Dan Noodles with a crispy, caramelized tofu-mushroom-walnut "meat" are heavenly. Served in a spicy, broth-y sauce over rice noodles with boy choy and green onion, I can't imagine a better weeknight dinner!

If you've never had dan dan noodles, drop what you're doing, gather up ingredients and make these ASAP. They're life-changing. SO flavorful, warming, spicy, and just delicious.

The recipe consists of a crispy, pan-fried vegan meat mixture (tofu, mushrooms and walnuts), seasoned with a spicy peanut sauce. Green onion and boy choy add some refreshing green, and everything is served atop rice noodles and drenched in more of the broth/sauce/deliciousness.

What are dan dan noodles?

To be completely transparent, our version of this recipe is not 100% traditional. We were unable to find some of the traditional ingredients that are less common in US grocery stores, but we did our best to replace them with similar, more commonly available options!

Plus, of course, our recipe is vegan, whereas the original recipe is not.

Traditionally, dan dan noodles are a spicy Chinese noodle dish with caramelized crispy, minced pork, chili oil, pickled vegetables and a flavorful sauce. It's spicy (but not too spicy), packed with complex flavors and perfectly saucy.

There are 3 components to this recipe: the vegan meat + vegetable mixture, the sauce and the noodles + garnishes. We'll break it down into all three sections and try to answer all of your questions about substitutions below!

All three of these items get added to a hot pan along with sesame oil, minced garlic, minced ginger and green onion. Once they've started to cook, you'll also add in ¼ cup of the sauce (ingredients below) to add flavor and help the mixture get caramelized and crispy.

Once the vegan meat mixture is cooked, we also add in chopped bok choy for some refreshing green. Cook until wilted.

The sauce is probably the most important component of these vegan dan dan noodles. It adds so much flavor to both the meat and noodles! Whisk everything together well and use in both the meat mixture and for the noodles.

Once the sauce is made, get your noodles boiling. Once the noodles are cooked, you'll add them to a pan with the rest of the sauce, let it cook down for a minute, then serve in a bowl topped with the crispy vegan meat mixture.

If you make this Vegan Dan Dan Noodles recipe, we’d love for you to leave a comment and rating below! We also love to see your creations on Instagram – tag us at @crowded_kitchen so we can see what you’ve been cooking.

These Vegan Dan Dan Noodles with a crispy, caramelized tofu-mushroom-walnut "meat" are heavenly. Served in a spicy, broth-y sauce over rice noodles with boy choy and green onion, I can't imagine a better weeknight dinner!