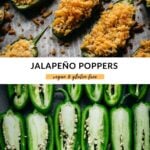 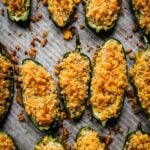 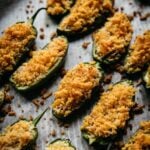 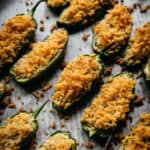 These vegan jalapeño poppers are crispy, cheesy, gluten free and pack just the right amount of spice for an easy 30 minute appetizer.

I'm going to be making a ton of these vegan jalapeño poppers. Yes, the main reason is that they're delicious and everyone tried them wants more. But also, so.many.jalapeños. My fridge (and freezer) is currently packed with the green peppers.

I had to order my groceries to test this recipe from Amazon Fresh. I didn't have time to go to the store. And because there isn't much produce in this recipe, I felt ok ordering. Usually, I like to choose my own fruits and veggies. Not to mention, avoid all the unnecessary packing that always comes from Amazon.

But given the situation, I went ahead and ordered. I thought 15 peppers would be enough for a first pass at the recipe. I could always go to the store the next day for a retest.

Little did I know that I won't need to buy more jalapeños for probably the next 3 years. Instead of 15 peppers, I received 15 POUNDS of jalapeños at my apartment.

Naturally, after shaking my head in serious disbelief (what household would order 15 pounds of peppers??) I went straight to Google for help making the most of this unexpected (and unwanted) bounty.

So far I've made a giant batch of quick pickled jalapeños with our guide to quick pickling. I've also included the peps in every.single.meal. I've cooked since the delivery. Yes, our Thanksgiving dinner included some extra spicy glazed onions.

But most importantly, I made several tasty batches of these vegan jalapeño poppers.

Moral of the story? Be careful what you order from Amazon Fresh and make many, many jalapeño poppers this winter.

They're a fast, easy appetizer that can be made ahead of time!

What are Jalapeño Poppers?

I'm not sure if there's a technical definition of this spicy snack. But in general, jalapeño poppers are cheese-filled, melty yet crispy, jalapeños. They're a pretty typical bar food, but I'm firmly in the camp to bring them out of the bar and onto your appetizer spread.

These vegan jalapeño poppers do kind of have it all, when it comes to appetizers.

Do you really need another reason to make these poppers? (If you do - I have 7 pounds left in my freezer.)

The first step in this easy plant-based recipe is to prep your peppers.

Start by cutting each jalapeño in half lengthwise. You can leave the stem attached, as it provides a nice handle for the poppers.

Then, remove the seeds and membrane inside the peppers. This stuff holds a lot of spice, so be sure not to touch your eyes before washing your hands well. You'll also want to give your cutting board a thorough scrub down before using it for anything else.

Once your peppers are halved and cleaned, they're ready to be filled.

We're filling these creamy vegan jalapeño poppers with a garlicky, herby, cheesy filling. After mincing some garlic and parsley, you're basically ready to throw everything together.

Nutritional yeast is a must-have ingredient for cheese-loving vegans. It's full of umami flavors and really reminds me of parmesan. Plus, it's full of B vitamins, which many vegans and vegetarians can lack in their diets. It's pretty common at supermarkets, and easily available online.

I did find, however, that a lot of vegan shredded cheese come in super long strands. To make sure that all your cheese can fit inside a jalapeño, it's best to chop it up a bit smaller before mixing your filling.

The final ingredient in your vegan jalapeño popper recipe is crispy bread crumbs. I recommend unseasoned bread crumbs for this appetizer recipe. And if you're gluten free, we love Ian's.

When you're mixing your jalapeño popper filling, be sure to reserve some extra cheddar and breadcrumbs to sprinkle on top. They'll get nice and melty and crunchy.

After you make the cheesy vegan filling, it couldn't be easier to fill and finish your jalapeño poppers. Simply take a rounded spoonful of filling and spread it into each pepper half.

Be sure to spread the filling into all of the pepper's nooks and crannies. No one wants an empty popper!

Finally, pop those poppers into the oven until they're golden brown and crispy.

You can store the uncooked, filled peppers in the fridge for several days before baking. Leave the cheddar and breadcrumbs off the top so they don't get soggy. Then, simply bake as directed in the recipe.

There you have it - the perfect holiday appetizer! And don't worry - the jalapeños aren't as spicy as you might think. The cream cheese really helps tone down the spiciness, and as long as you've removed the membrane and seeds, they should be good to go.

With the holidays coming up, now's the time to bookmark a few great appetizer recipes. Here are a few of our favorite crowd-pleasing recipes!

If you make these Vegan Jalapeño Poppers, we’d love for you to leave a comment and rating below! We also love to see your creations on Instagram – tag us at @crowded_kitchen so we can see what you’ve been cooking.

These vegan jalapeno poppers are crispy, cheesy, gluten free and pack just the right amount of spice for an easy appetizer.

Be sure to fully remove the inner membrane and seeds of the jalapeño. We recommend using a spoon to easily scoop it out.