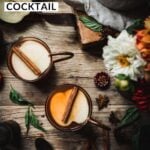 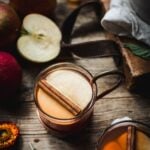 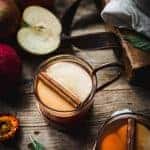 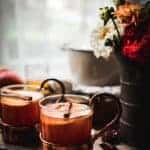 Apple cider is good. Great, some might argue. But you know what's better?

The simple act of heating apple cider somehow makes it 10x more appealing. It brings out the complexities of the cider, and each sip is comforting, nostalgic and more delicious than the last.

Hot cider also has the added benefit of being the perfect vehicle for alcohol, be it whiskey, bourbon, or in this case, apple brandy! To round out the cocktail, we also add a squeeze of lemon juice for acidity, maple syrup for extra sweetness and flavor, and cinnamon for depth.

It's perfect for just about any fall entertaining occasion, but it's even better enjoyed without a special occasion. Just get a batch simmering on the stovetop, enjoy the fragrant aroma as it wafts through your home and slowly sip a warm mug (or two). I can't think of anything more relaxing!

The good news is that it's incredibly easy to make once you have the proper ingredients assembled. While most of the ingredients are easy to find, you may not have heard of apple brandy before. It's the star of this hot apple cider cocktail, and it's a must-have pantry item come fall.

Here's what you need to know.

What is apple brandy?

Apple brandy is essentially a concentrated apple spirit made by distilling fermented apple cider. Its roots in the US trace back to early colonial times, but even further in Europe, where it's been a craft for centuries.

Apple brandy is often referred to Applejack or Calvados. The former refers to a popular New Jersey-born spirit, and the latter refers to the original fermented French apple brandy originating in Normandy. Applejack is technically apple brandy diluted with neutral spirit. Calvados is alternatively a double-distilled cider with a ABV of 60-80%.

While apple brandy can be enjoyed on its own as an after-dinner digestif, it also adds complexity and depth to fall cocktails. You can add it to a cocktail in addition to a stronger liquor, like whiskey or vodka. I personally love adding a dash into a Moscow Mule. It pairs so well with ginger beer and lime!

You should be able to find some version of apple brandy at most liquor stores or specialty grocery stores. When in doubt, ask an employee. Much easier than scanning the shelves on your own!

In this hot apple cider cocktail, apple brandy is the only spirit. We wanted a drink that's easy to sip, with just a hint of fermentation. If you's prefer something stronger, a dash of bourbon would be an excellent addition. It's completely up to you and your preferences!

It takes just a few minutes to bring this cocktail together. Simply add everything (except the brandy) to a small saucepan, bring to a simmer, then remove from heat. Stir in the apple brandy, pour into a mug and you're good to go.

If you'd like to add more depth of flavor, you can simmer the cider for longer. The more time the cinnamon has to infuse into the cider, the better (in my opinion!).

On an apple cider kick right now? Yep, me too. Here are a few more apple cider-based cocktails to celebrate autumn while it's still here!

Optional: if you'd like, you can simmer for a longer period to infuse more cinnamon. Just be sure to simmer over very low heat.