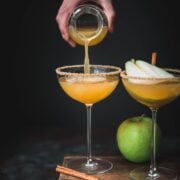 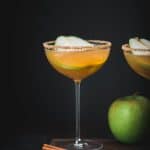 If you've been following us at Crowded Kitchen for a while, you probably know that we're pretty into homemade cocktails. Since we literally cook & create recipes for a living, we don't often go out to restaurants or bars. It's always fun to go out, but we're always looking to try new recipes at home instead!

For a quick weeknight drink (or large-batch cocktail for a party), we might opt for something a bit easier. But for a special occasion (like a fall dinner party), this Apple Pear Martini is a more sophisticated, flavorful option!

How to make an Apple Pear Martini

Our recipe calls for fresh apple cider, as well as fresh pear or apple juice. Apple cider should be easy to find at this time of year. If you live somewhere with plentiful apple orchards, we suggest taking a trip to your local cider mill for some fresh cider. It's a fun fall activity, and fresher always tastes better!

If you're opting for apple juice instead of pear juice, go for higher quality. (In other words, avoid Mott's or anything that's mostly concentrate.) We typically prefer to make fresh apple or pear juice at home. The freshness adds so much to this cocktail!

To make homemade apple or pear juice, we use our juicer. Of course, you can always go with store-bought.

To add extra fall flavor to this cocktail, we also use a pear-flavored vodka. It's not completely essential, but definitely encouraged. You should be able to find pear vodka at most liquor stores.

You can also use apple vodka instead - just keep in mind that the higher quality the alcohol, the better this cocktail will taste!

To round out the flavor of this Apple Pear Martini, we whip up a quick homemade cinnamon simple syrup as a sweetener.

Homemade simple syrup is incredibly easy to make and requires only 2 ingredients: water and sugar. Plus any flavor enhancers (in this case, cinnamon sticks!)

To make simple syrup, add equal parts water and sugar to a saucepan over medium heat. Heat until sugar has dissolved, stirring occasionally. Add the cinnamon stick(s), bring to a boil, then remove from heat.

Cover the pan and let sit for an hour before removing the cinnamon stick. Then, transfer to an airtight container and store in your refrigerator for up to a few weeks. That's it! So easy, and so much flavor.

We love making homemade simple syrups for our cocktails. Before the holiday season, we make a few batches of our go-to syrups so they're ready for holiday cocktail recipes.

Try this seasonal cranberry maple simple syrup, this refreshing basil simple syrup, or this spicy jalapeño simple syrup. The possibilities are endless. Try a variety of fall spices, herbs, or other ingredients like ginger, orange, etc.

Let us know your favorite infused simple syrup in the comment section below!

For Thanksgiving, how about this delicate Cranberry Orange Whiskey Cocktail? This Pear Vodka Cocktail is another favorite, as well as this warming Hot Apple Cider Cocktail. You can't go wrong with either!

This apple pear martini is fall in a cocktail!