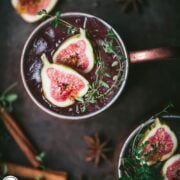 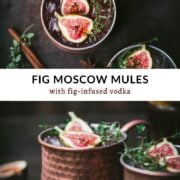 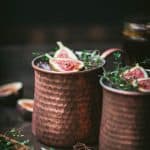 Fig Moscow Mules: the perfectly spiced, refreshing fall vodka cocktail you didn't know you needed! Our version is made with homemade fig-infused vodka, but we've also included a shortcut if you don't have the time to infuse.

A few weeks back, we had some leftover figs from a photo shoot and didn't want them to go to waste. We made a spur-of-the-moment decision to infuse them in some vodka with cinnamon sticks and star anise.

Turns out, it was a great decision! After just two and a half days, the vodka took on a gorgeous red/pink hue and the warm fall flavors of figs, cinnamon and star anise.

We were instantly inspired to make these delicious Fig Moscow Mule Cocktails with the infused vodka. Moscow mules are my all-time favorite cocktail. They're incredibly easy to make, and the combination of vodka + ginger beer + lime is always a winner. With a few fun add-ins, the flavor possibilities are endless!

My younger brother Bryce (meet him in this post) ALWAYS asks me to make Moscow Mules when he's home from school. Being the excellent older sister that I am, I almost always oblige. It gives me a chance to test out new recipes, and I'm always happy to treat him to some decent vodka. We all remember the days of shitty college vodka, right? Yikes.

Since Bryce will drink (and eat) just about anything, he's the perfect taste-tester for Crowded Kitchen. He's not a huge fan of figs in their whole form, but he loved the subtle sweetness and spice of these Fig Moscow Mules! Also, let's be honest, he'll take any free alcohol he can get.

How to make fig-infused vodka

Infused liquor is so much easier than it sounds, and it's well worth the extra effort. It also makes a lovely DIY holiday gift! Recently, we've discovered two new favorite flavor combos: jalapeño infused tequila and strawberry infused vodka. The vodka absorbs so much strawberry flavor that it smells more like a syrup than alcohol!

This fig-infused vodka takes on a subtly sweet flavor with a hint of spice from cinnamon and star anise. Star anise is optional - if you don't have any, feel free to add another stick of cinnamon instead. Star anise has a distinctly strong flavor with licorice tones - it's not for everyone! To be honest, I can only handle it in small doses.

To make the fig-infused vodka for these Moscow Mules (or to use in another fig cocktail), simply follow these steps:

That's it! It's so easy to make your own infused liquor. We love playing around with various infused liquors - we recently infused vodka with pears, apples and cinnamon for an upcoming cocktail recipe.

Feel free to play around with a few different combinations. We just suggest doing a bit of research first as each infusion may differ in length of time, quantity, etc.

If you don't have the time (or desire) to make homemade fig-infused vodka, you can use regular vodka instead and make a quick fig simple syrup to add extra flavor to these cocktails.

To do so, simply combine ½ cup sugar and ½ cup water in a saucepan. Bring to a simmer, stirring until sugar is dissolved. Remove from heat, add about 5 sliced figs and 1 cinnamon stick. Let infuse for at least 30 minutes, preferably one hour.

Strain the syrup through a cheesecloth or fine mesh sieve and let cool before adding to your cocktail.

Once your infused vodka and/or simple syrup is prepared, these Fig Moscow Mules couldn't be any easier to prepare. Simply shake the vodka, lime juice and simple syrup in a cocktail shaker, pour over ice into a copper mug, and top off with ginger beer. Garnish (optional) and enjoy cold!

Testing out your mixology skills? Give these fall cocktail recipes a try:

We love the warm fall flavors of this fall-spiced fig cocktail - figs, cinnamon, star anise and ginger beer pair beautifully for an autumnal twist on a classic moscow mule.

*If you don't have time to infuse the vodka, use regular vodka and make homemade fig-infused simple syrup.

To make fig simple syrup, combine ½ cup sugar and ½ cup water in a saucepan. Bring to a simmer, stirring until sugar is dissolved. Remove from heat, add about 5 sliced figs and 1 cinnamon stick. Let infuse for at least 30 minutes, preferably one hour. Strain the syrup through a cheesecloth or fine mesh sieve and let cool before adding to your cocktail.