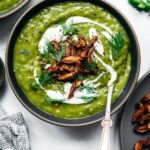 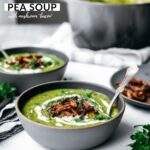 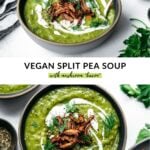 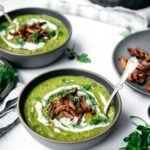 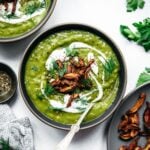 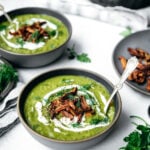 Vegan Split Pea Soup topped with crispy fried mushroom "bacon" is the comforting dinner you NEED in your life! It's hearty, packed with nutritious ingredients, and even kid-friendly.

Okay guys, gonna be honest with you. I kinda thought I hated split pea soup until I tried this.

As most of you know, I head up the photography and business development side of things for Crowded Kitchen, while my mom (Beth) heads up all of the recipe development. When she told me she was working on a split pea soup and kept raving about how good it was, I was pretty skeptical.

But let me tell you, friends, I was hooked at first spoonful. Topped with crispy fried shiitake mushroom "bacon", this vegan split pea soup is SERIOUSLY good. And it doesn't even taste vegan (whatever that means).

But you know what I mean, right? The whole family will love this recipe. And we're pretty sure everyone will go back for seconds, so you might want to make a double batch.

Most traditional split pea soup recipes contain ham bone, which adds meaty flavor and heartiness to the soup. To be honest, I never really liked ham, even before I stopped eating meat. It never did much for me, and my husband hates it, too.

But good news! It's actually pretty easy to make split pea soup taste great without ham or any dairy ingredients.

I'll tell you right now, DON'T skip out on the fried mushroom bacon. You guys, it is so ridiculously good. We couldn't stop eating it. In fact, we barely had enough left over to style these photos! The soup is great on its own, but it's really next level with the mushrooms.

Here's a quick breakdown of some of the most important ingredients you'll need for this vegan split pea soup. Scroll down to the recipe card for the full ingredient list!

How to make fried mushroom bacon

The best part: MUSHROOM BACON. I just can't even put into words how much I love this stuff.

I would never eat bacon now that I've been vegetarian for almost 4 years, but I have to admit, I do miss the smoky, rich flavor it adds to recipes. And the texture. There's nothing better than crispy bacon!

We're super excited about this mushroom bacon. It gets perfectly crispy, has plenty of deep umami flavor and a hint of smokiness (thanks to smoked paprika).

It's easy to make, too – all you need is a deep pan and some frying oil! We use a dutch oven to prevent oil splatter mess. You only need an inch or two of oil, but it's much easier to clean up if you use a bigger pot.

Shiitake mushrooms are the best choice. They have a natural smoky, earthy flavor and meaty texture. Plus, they're pretty easy to find in most grocery stores.

Slice the mushrooms into thin strips, fry in high heat oil for about 5 minutes (until crispy and browned), then sprinkle with a mixture of salt, pepper and smoked paprika. Make sure you sprinkle them right after they come out of the pot, otherwise the salt won't stick.

That's it! Just be sure not to crowd the pot. You may have to do a few rounds, but it's so easy that it's really not much of a hassle. We do suggest making extra, because you'll probably find yourself snacking on most of them 😉

In addition to the fried mushroom bacon, we also top our split pea soup with a drizzle of vegan sour cream and more fresh dill. You could also use yogurt or coconut cream. So good!

Love this vegan split pea soup? Here are a few recipes to try next:

If you make this vegan split pea soup recipe, we’d love for you to leave a comment and rating below! We also love to see your creations on Instagram – tag us at @crowded_kitchen so we can see what you’ve been cooking.

Vegan Split Pea Soup topped with crispy fried mushroom "bacon" is the comforting dinner you NEED in your life! It's hearty, packed with nutritious ingredients, and even kid-friendly.

When reheating leftovers, you may need to add more vegetable broth to loosen it up. The soup tends to thicken when refrigerated.