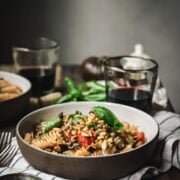 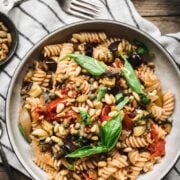 There's something about the end of summer that feels like the best time to eat pasta. And this plant-based recipe, full of late summer vegetables, hits the spot.

How to make caramelized onions

If the word "caramelize" doesn't make you hungry, we then we have very different taste buds. I'll pretty much order anything that's described as caramelized on a menu.

But caramelized onions? They especially have my heart.

Here's how to make simple foolproof caramelized onions for this roasted eggplant pasta, and many other dishes:

First, heat a drizzle of olive oil in a non-reactive skillet over medium heat. Keep that bottle of olive oil on hand. You may need to add more to keep the onions from burning or sticking.

Then, add thinly sliced onions and reduce the heat to medium-low. Pro tip: add more onions than you think you'll need! They cook down quite a bit. Plus, you'll have to account for all the bites of onion you sneak along the way.

To slice an onion for caramelizing, first trim your onion, removing the root and stem ends. Then slice the bulb in half and peel. Lay an onion half cut-side-down on a cutting board.

Then thinly slice with the grain of the vegetable to make nearly transparent slices. This way, your onions pieces are all about the same size, so they'll cook evenly.

You can add a pinch of salt to the onions in your pot. But really, all that's left to do is let them cook down. They may take a while to start browning, but be patient.

You don't want to rush caramelization! Rushing will no doubt lead to burning. Keep you stove at a conservative medium-low flame, and stir the onions every so often. They're done when they're totally melted into a jammy texture of deliciousness.

Cooking onions helps to break down that harsh bite you probably dislike in raw onions. Caramelization, which is a slower, general process of cooking, also draws out the vegetables' natural sweetness.

By cooking your onion slices low and slow, you releases much of the liquid inside the veggies. The result is melty, silky morsels.

You may not think of onions, even sweet onions, as the sweetest produce. But try a truly golden caramelized onion, like in this roasted eggplant pasta, and you'll certainly taste those natural sugars.

What's happened is that as the onions brown, their sugars become more pronounced. This browning, known as the Maillard reaction, is the secret to flavoring nearly any cooked dish.

What other fruits and vegetables can you caramelize?

You can use this same technique to bring out the natural sweetness in many other produce. The best candidates are high in natural sugars and low in water content. Try:

Oven-roasted eggplant and tomatoes add to the rich flavors in this weeknight pasta. Using the oven this time, you'll get the same golden-brown caramelization on the eggplant as your onions.

Eggplants contain a lot of water. So it's important to remove some of that moisture to achieve good caramelization. To do so, cut your eggplants into 1-inch cubes.

Then toss them with salt and let them sit for up to 30 minutes before cooking. You'll draw out some of the water to help your eggplant cubes brown up nicely. Then just try them with a clean dish towel before roasting.

You'll add the tomatoes to the baking sheet about halfway through roasting the eggplant. Tomatoes cook faster, but you want to let them break down a bit in the oven. They'll release their flavors into the pasta and roasted eggplant, creating a natural sauce when you toss everything together.

To toast pine nuts, be sure to pay close attention. They can burn easily! You want to keep your skillet moving consistently while cooking. Leave them too long in one spot, and you can quickly get nuts burnt to a crisp on one side.

We also added capers to this roasted eggplant and tomato pasta. Capers are such a simple way to add saltiness with extra flavor, rather than plain salt. They act as little pops of briney goodness mixed throughout your pasta.

And finally, to add that last hit of flavor missing from this eggplant pasta: red pepper flakes. Red pepper flakes are our go-to spice to shake over everything from savory breakfast bowls to pizza to tacos.

We use them so much, we buy them in bulk. But I've noticed that they can lose their spiciness pretty quickly. So unless you're doing a lot of spicy cooking, you might want to stick to a normal sized spice jar 🙂