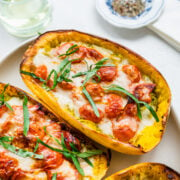 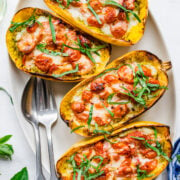 This Pesto Caprese Spaghetti Squash with a bubbly mozzarella topping is a delicious vegan dinner or side dish! It's easy to make, packed with vibrant flavors and is naturally gluten free.

This post is sponsored by Miyoko's Creamery. All opinions are our own.

🥗 Why We Love This Recipe

Here's what you'll need to make this caprese spaghetti squash:

If you haven't yet heard about Miyoko's Creamery Liquid Vegan Pizza Mozzarella, you're in for a treat!

Miyoko's is seriously revolutionizing the vegan cheese industry with this new product. We first tried it last summer and we're totally hooked!

Vegan cheese can have a bad rap when it comes to melting. Miyoko’s came up with the brilliant idea to make a liquid cheese by removing all the ingredients that hinder performance (did you know most shreds contain things like caking agents to keep shape?!) and cutting straight to the melt. It tastes just the same, but actually gets melty, bubbly, and seriously cheesy!

It's INCREDIBLE on homemade pizza and all sorts of other baked dishes, like lasagna, enchiladas, casseroles, hot dips, baked pasta, and of course, this caprese spaghetti squash!

We also love that it's made from plant milk (ethically sourced cashews) and is palm oil free.

Miyoko's Creamery is a mission driven, woman-founded brand and we're constantly so impressed by their incredibly high quality products. They're truly changing the food industry as a whole and we're such huge fans! You can see where to find their products here, or order online here.

(1) Slice squash in half lengthwise and use a spoon to remove the seeds. Brush each half with ½ tablespoon of olive oil and sprinkle with ¼ teaspoon of salt and ⅛ teaspoon of pepper. Set cut side down on baking sheet and roast for 35-40 minutes, until squash is fork tender.

(2) Remove squash from oven and let cool slightly before flipping over. Use two forks to shred the spaghetti squash and transfer the shredded squash to a large mixing bowl.

(4) Toss the shredded squash with pesto until well coated.

(5) In a skillet over medium heat, add the tomatoes, remaining 1 tablespoon of olive oil, balsamic vinegar, salt and pepper and stir well. Cook, stirring often, until tomatoes are softened and burst, about 6-8 minutes.

(6) Divide the squash + pesto mixture between the empty spaghetti squash skins. Top with tomatoes, then top each squash half with ¼ cup of liquid mozzarella.

Bake for 13-15 minutes (at 400˚F), or until cheese is bubbly and slightly browned. Remove from oven and serve warm with fresh basil.

Tried this recipe? Please leave a star ⭐️⭐️⭐️⭐️⭐️ rating below and/or a review in the comments section further down the page. You can also stay in touch with us through social media by following us on Instagram, Pinterest, and Facebook or by subscribing to our newsletter.

This Pesto Caprese Spaghetti Squash with a bubbly mozzarella topping is a delicious vegan dinner or side dish! It's easy to make, packed with vibrant flavors and is naturally gluten free.

How to make spaghetti squash easier to cut: If you're having trouble slicing the squash in half, poke several holes in the whole squash with a fork. Wrap in a damp paper towel and microwave on high for 3 minutes. Let cool slightly before cutting. This helps soften the squash so it's easier to cut, and also helps it cook faster in the oven.

Pine nuts: For maximum flavor, toast your pine nuts in a small skillet over low heat for a few minutes before adding to the pesto. Be careful – they burn quickly! You can also substitute pine nuts with pistachios, walnuts or pumpkin seeds.

Make this recipe faster: You can roast the spaghetti squash several days before using. You can also use store bought pesto instead of making it from scratch!

Storage: store leftovers in an airtight container in the refrigerator for 3-4 days. Reheat in the microwave or the oven.