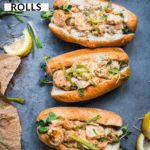 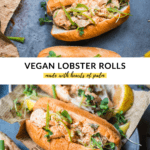 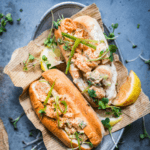 These vegan Lobster Rolls are super quick and easy to make, packed with flavor and seriously taste like the real deal! They’re such a fun idea for summer entertaining and have gotten rave reviews from meat-eaters and vegans alike.

I used to LOVE a good lobster roll. We made it a family tradition to make an (almost) yearly road trip to the east coast (Maine, New Hampshire, Massachusetts) and always made room for lobster rolls at just about every stop. They’re a summer staple in New England!

Served in a buttered, lightly toasted bun, I can’t think of a better roadside snack.

But, of course, since I no longer eat meat, we absolutely had to come up with a vegan alternative.

It’s been years since I’ve had a real lobster rolls, and I’m thrilled with this recipe! While the lobster taste is (obviously) not there, the textures and flavors are surprisingly similar.

You absolutely have to give these a try this summer! They’re so much fun for a summer dinner party, bbq or 4th of July celebration. If you have vegan and non-vegan guests, you can always make two options (one with lobster and one without).

These vegan lobster rolls are SO easy to assemble.

Start by whisking together the mayo, yogurt, dijon, hot sauce, lemon, paprika and salt until it’s creamy and smooth.

Then, drain the hearts of palm and roughly dice. I like to leave some pieces larger and slice some smaller to better mimic the texture of lobster meat.

I find it’s best to finely mince the celery so you don’t get huge chunks. Add in the chopped herbs and then toss everything in the mayo sauce until well coated.

Serve the vegan lobster mixture in a lightly toasted bun, preferably brushed with vegan butter. If you’d like, you can line the roll with lettuce and/or tomatoes. I usually like to keep it simple with just the lobster mixture!

Same goes for toppings. It’s great plain, but you could also add some more fresh herbs like chives, green onion or tarragon.

For a classic pairing, serve alongside chips or homemade crispy fries. I also love some good herb-roasted potato wedges. Yum! You could even make more of the mayo sauce for dipping.

If you make these vegan lobster rolls, we’d love for you to leave a comment and rating below! We also love to see your creations on Instagram – tag us at @crowded_kitchen so we can see what you’ve been cooking.

These vegan Lobster Rolls are super quick and easy to make, packed with flavor and seriously taste like the real deal! They’re such a fun idea for summer entertaining and have gotten rave reviews from meat-eaters and vegans alike.

You can make the filling up to 5 days ahead of time. Stir well before serving.

In place of scallions and parsley, you can also use dill, tarragon or chives.

Welcome to our Crowded Kitchen!

We're Lexi and Beth, a mother-daughter team from Michigan. The recipes you'll find here are a reflection of how we bring our family together around the dinner table despite various dietary differences. To learn more about us, head here!

Can’t even count how many times we’ve made the

This pineapple teriyaki tofu is: ✅ Ready in 30

You have your savory dips covered, but how about a

Long weekend plans: a pitcher of this sangria 🍷

Subscribe to get our latest recipes in your inbox