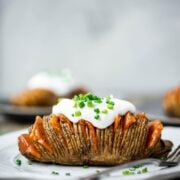 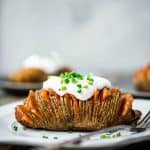 Cheesy vegan hasselback potatoes are a delicious side dish or appetizer, especially for game day!

Hasselback potatoes just got a huge upgrade. We stuffed them with Field Roast Chao Tomato Cayenne "Cheese" Slices for a vegan twist on a traditional (read: boring) baked potato! These babies are the perfect game day snack, especially topped with vegan sour cream and fresh chives.

Hasselback potatoes are one of my favorite ways to eat potatoes. And that's really saying something, since potatoes are one of the single greatest foods. I love how crispy hasselbacks get, and they're way more fun to eat, especially when stuffed with vegan cheese!

We've hasselbacked fingerlings, Yukon golds, sweet potatoes, purple sweet potatoes, you name it. But we prefer a classic russet potato for these. They're a perfect size to hold enough vegan cheese and they're easy to prepare.

There are a few important tips we've learned about preparing hasselback potatoes:

We kept this recipe pretty simple (just the potatoes + olive oil + salt & pepper + the vegan cheese + toppings). If you'd prefer to change things up, try swapping olive oil with melted vegan butter. You could also mix th butter with some garlic and fresh herbs. So flavorful!

The cooking time is about one hour total. You'll need to brush the potatoes with olive oil both at the beginning and at halfway to keep them moist. You also won't add the vegan cheese until the potatoes nearly finished. The Chao slices only take about 5 minutes to get melty, slightly crispy and completely delicious!

We used Field Roast's Tomato Cayenne flavor for a bit of spice, but we've also used their Creamy Original Flavor and it's equally delicious.

We're excited to serve these Vegan Hasselback Potatoes at our Super Bowl party this year along with our favorite vegan Caramelized Onion Dip. We hope you give them a try, too!

These cheesy hasselback potatoes are your new vegan game day go-to! Topped with vegan sour cream and chives, because yum.

-It's important to use a very sharp knife - a dull knife will make this very difficult and tedious.

-We use a silicon basting/pastry brush to brush the olive oil on the potatoes and it works well.